1. Explain computer and its components.

Computer is an electronic device that accept some input, process it and
produces some output.

Several Components of computer system are:

These components of computer system are diagrammatically represented as :

a. Keyboard: It is the most commonly used input device to type alphabets, digit and symbols.

b. Mouse: It is the most commonly used pointing device to move cursor and select different software components.

CPU is also called brain of the computer. It is also known as processor. It is responsible for carrying out all activities in a computer. It is further divided into three parts:

a. Control Unit  (CU): This unit is responsible for flow of data and instructions between different units of computer. It decides whether data should go to ALU, registers, memory unit, secondary storage or output unit.

b. Arithmetic Logic  Unit (ALU): This unit is responsible  for arithmetic calculations and comparison.

c. Registers: They are memory cells inside CPU to store data temporarily. They are mainly used to store frequently used data.

Memory unit is used to store data and instructions. It  stores data in machine language i.e. in the form of 0 and 1. The binary digits 0 and 1 are known as bits.

This unit is also termed as primary memory. It consists of three parts:

It is used to store data and instructions temporarily. It retains data in it as long as the power is on. All the contents of RAM get  cleared if power supply is turned off . Whenever a software is opened, it automatically gets opened in RAM.

RAM is of two types:

Dynamic RAM: It consists of capacitors and transistors. It uses electric charge to store the data.

Static RAM: It consists of flip-flops. It stores data in binary form. They have faster access time compared to dynamic RAM.

ROM stands for Read Only Memory. Data is permanently stored in ROM. ROM contains instructions needed to start up the computer and load operating system into RAM.

ROM is of three types:

It is special memory used to compensate the speed difference between CPU(very fast) and RAM(very slow). It stores the copies of  frequently used data from RAM. Hence it reduces the time required to access data from primary memory.

Secondary storage unit is used to store data permanently.  It consists of different types of storage devices. Most commonly used storage devices are:

b. Compact Disk (CD): CD is an optical disk to store data. CD’s have a storage capacity of 700 MB. There are three types of CDs:

ii. CD-R (Compact Disk Recordable): Data can be recorded on these CDs only once.

DVD is an optical disk to store data. DVD’s have a storage capacity of upto 17 GB. There are three types of DVDs:

ii. DVD-R (Digital Versatile Disk –  Recordable): Data can be recorded on these DVDs only once.

Blu ray disk is optical disk that can store HD (High Definition) videos and data. They can store up-to 128 GB of data .

It is also called Flash memory. It is a solid state memory that can store more than 128GB of data.

This unit is used to get output from computer. This unit convert machine language to human understandable form. Most commonly used output devices are:

a. Monitor: It is used to display data just like TV screen.

b. Printer: It can be used to take printout of data stored on computer.

2. Explain software and its types

Software is defined as a collection of programs  which are used for different purposes.

There are three types of software:

Application software is used to perform specific operation on computer. They are of two types:

These softwares can be used by only one type of user. Example: Banking Data Management software can be used only by bank employees.

System software is used to perform functions related to general operations of computer system.. They are of two types:

3. What is operating system? What are its functions?

Operating system is an interface  between computer hardware and user. It is responsible for the management of activities and the sharing of the computer resources.

a. Shell: It accepts instructions from user and instructs kernel to perform further operations

b. Kernel: It accepts instructions from shell and instructs hardware devices to perform operations.

Different functions of operating System are:

A mobile phone is composed of various parts. These parts are: 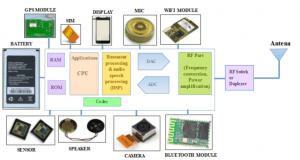 Baseband part contains a digital signal processor (DSP) which processes received or transmitted signals. It also compresses and decompresses the signal along with error detection as correction.

ADC(Analog to Digital Converter) and DAC(Digital to Analog Converter) is used to convert analog speech signal to digital signal and vice versa.

It consists of protocols for process-to-process communication across an IP network.  It includes audio,video and image/graphics applications. It provides many services like Simple Mail Transfer, Protocol, File transfer, graphics etc.

Camera is used to click pictures and record videos. There are various mega pixel cameras for mobile available as 5 mega pixel, 13 mega pixel and even 41 mega pixel available in smartphones.

There are lot of display types used in mobile phones. They can be either color or monochrome. The color displays mostly use TFT displays. Touchscreen displays also use TFT technology. They are of two types:

It converts electrical signal to voice. It comes with audio amplifier to amplify the audio signal. It also has volume control circuit to increase or decrease volume of audio signal.

An antenna converts electromagnetic radiation into electric signal and vice versa. In mobile phone, antenna is embedded inside so it is not  visible to us.

This part is used for wireless connectivity to internet and other mobile phones or computers.

This part is used for Bluetooth connectivity between mobile phones and other devices within a limited area of upto few meters only.