4 Types of Operators in C 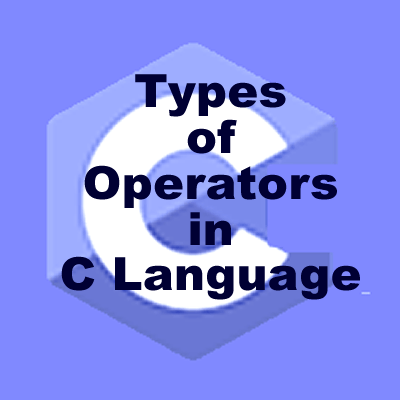 These are the symbols which are used to perform some calculation or manipulation on values which may be in the form of variables, constants or expressions in a C program.

It is the variable, constant or expression on which an operator performs some calculation, comparison or some other manipulation.
Example
6+5
In the above example, 6 and 5 are operands. + is the operator which is performing addition of 6 and 5

Types of Operators in C

Operators are of various categories as

Unary operators are those operators which have single operand. They are of following types:

It is used to specify that the number is positive. It is an optional sign because a number without any sign is automatically considered positive.

It is used to specify that the number is negative.

It is known as pointer or pointer to operator. It is used to declare and use the pointer variable.

It is also known as “address” operator. It is used to store the address of a variable in pointer variable.

**Above statement stores the address of variable num in pointer variable ptr.

These are the operators which can have two operands. Various categories of binary operators in C language are:-

This operator is known as ternary operator because it has three operands.

Ternary operator is represented as ?: .

These operators are used for special purposes. There are many special operators provided by C language which are as follows: