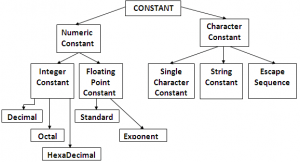 A Constant may be defined as a quantity whose value can’t be changed during the execution of a program. Constant can be divided into following categories.

Numeric Constant can contain digits in It can be categorized into two types:

Integer Constants can contain numbers without decimal point.  They are of three types:

Decimal Integer Constant can contain digits from 0 to 9. So base of decimal integer constant is 10.

Octal Integer Constant can contain digits from 0 to 7. Octal numbers always start with 0 in C.

Hexadecimal Integer Constant can contain digits from 0 to 9 and alphabets from A to F. where

Floating point constants/Real constants are those constants which can contain numbers with decimal point.

Floating point constants can be categorized into two types

Character Constants are those constants which can contain any symbol which can include alphabets, digits, special symbols as well as blank spaces. Character constant can be categorized into two types:

It can contain an alphabet, digit, special character or space within the pair of single quotes (’). It should not contain more than one character in it .

It is defined as a sequence of one or more characters enclosed in double quotes (“). We can use alphabets, digits, special characters as well as blank spaces in a string constant.

String constant is always terminated with a special character known as null character (‘\0’).

It is used to insert one blank line where it appears.

It is used to leave a gap of 5 spaces.

A small beep(sound) is produced.

It deletes a character before it.

If \r is used in between a string, all the characters before it will not be shown. If \r is used in the end of string, the cursor will be placed at the very first character of the string in the output.

It is used to show back slash in the output.

It shows single quotes(‘) in the output.

It shows Question Marks (?) in the output.

It is used to terminate a string. Nothing after it will be shown.