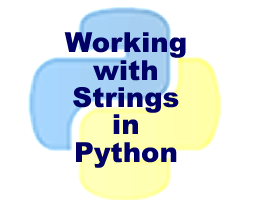 What is a String in Python?

String is a sequence of characters within the pair of single quotes(‘) or double quotes (“).

Stringvariable refers to name of variable defined by the programmer which can store a string value.

Value1 refers to sequence of characters within pair of doubel quotes(“) or single quotes(‘).

2. Accessing characters of a String

Each character of a string has an index associated with it.

Characters of a string are also indexed in two ways:

Example we have a string word=”School”

Characters of above string are indexed as follows:

Similarly we can access last element of above string as word[5] or word[-1].

We can view specific characters in a string by specifying the range of indexes within the pair of square brackets as:

4. Find number of characters in a string

Function len() of Python returns number of characters in a string value. The syntax of len() is

string refers to sring value whose length we want to fine.

We can use ‘in’ and ‘not in’ operators with Strings

We can concatenate two string values by using concatenation operator (+).

We can use replication operator (*) to repeat a string value.

We can compare string values by using relational operators of  Python.
Strings are compared character by character i.e. dictionary order.

9. Find Unicode of a Character

10. Find character on the basis of Unicode

We can use chr() function of python to view a charater on the basis of unicode value.

Traversing is the technique of fetching each and every character of string at least once.
We can traverse individual characters of a string through their indexes. Using these indexes, we can traverse a string character by character.
We can use for() loop for traversing a string.
Example: