Introduction to function in C Language 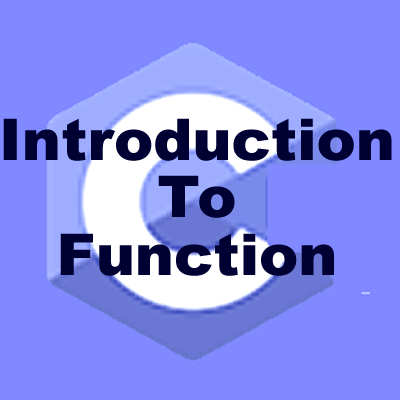 Introduction to function in C Language

Function is defined as the named group of statements which can be used to perform a specific task. A function can contain one or more valid C language statements.

When we call a function, all the statements written within the function are executed on after another.


Advantages of a function

Defining a function in C Language

A function must be defined before it can be called within a program.

The syntax of a function is

It should be void if function doesn’t return any value. The return type must be same as the data type of the value returned by the function.

Func_name refers to the name of function defined by the programmer. It should follow all the rules of a valid identifier of C language. Each C language program must contain one function named main() where the program actually starts execution.

These arguments can receive values from another function. The names of arguments must follow all the rules of a valid identifier of C Language. There should be no semicolon after the parenthesis.

Local Variables are declared and used within the function body only. These variables get automatically destroyed when the program control leaves the function.

Statement_Block refers to set of valid C language statements which would execute when we call the function.

return is a keyword of C Language. It is used when function returns some value. It appears with an expression with or without  pair of parenthesis after it. We can use it without parenthesis and arguments to simply return the control of program to the calling function.

Components of a function

There are various components of function which include the following things.

Return_Type refers to the type of value returned by the function name.

type1,type2,…typeN refer to the data types of arguments passed to the function.

arg1, arg2…. argN refer to the names of arguments. The arguments must be separated by commas. All the arguments must be independently declared with the data type specifiers and name. While defining a function, we need not to put semicolon after the parenthesis given with the function name.

To call function show() defined above, we can write the following statement