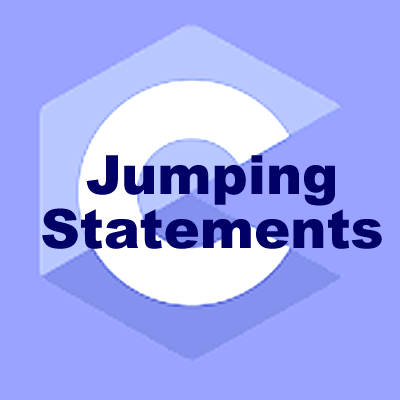 There are four types of jumping statements in C language.

break is a keyword of C language.It is used to transfer the control of program out of switch or looping statement.

for statement starts with 1 and should go upto 5. When value of i becomes 3, break statement would execute and control would come out of for statement.

continue is a keyword of C language.

It is used with looping statements. It is reverse of break statement.

for statement starts with 1 and should go upto 5. When value of i becomes 3, continue statement would execute and control would go to the next iteration of for statement i.e. statements after continue would be skipped and value of i would become 4 and so on.

goto is a keyword of C language.

goto statement can be used in two ways:

Description of above program

In the above program, start is the label defined by the programmer in Line 1. When the program is executed for the first time, two values are entered by the user whose sum is to be found. After displaying sum of the entered values. Message would appear as “Want to repeat y/n)”. if ‘y’ is entered by the user, control would go to Line 1 and whole program  would execute again.

Whenever exit() function is found in a program, the program terminates and no statement after it would be executed.