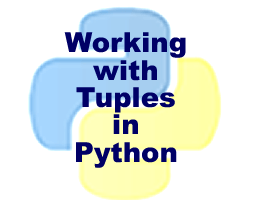 What is a Tuple in Python 3?

Tuples are immutable i.e. we can’t modify the elements of a tuple.

To create a tuple, we can put multiple values within the pair of parenthesis.

tuplename refers to name of tuple defined by the programmer.

( ) Pair of parenthesis specifies that it is a tuple.

value1, value2,value3, …. valueN are different values stored in the tuple.

Empty tuple contains no element in it.   It is equivalent of 0 or ‘ ‘(blank).  So it has truth value as False.

We can create an empty tuple in two ways:

a. By specifying an empty pair of square parenthesis

Note:  Tuple1 is an empty tuple containing no element in it.

b. By using tuple() function without anything within the pair of parenthesis.

Note:  Tuple2 is an empty tuple containing no element in it.

If  we give a single value within a pair of parenthesis, Python considers it a single variable value

To create a tuple with one element, we need to add a comma after single value within the pair of parenthesis:

If tuple contains many  elements which are not  able to fit on one line, we can split it across several lines as given below:

If one tuple is enclosed within another tuple, it is known as nested tuple.

A tuple can contain another tuple as its  element. Such a tuple is called nested tuple

6. Creating  a Tuple from Existing Sequence

We can use tuple() function to create tuple from existing sequences as given below:

Here, tuplename refers to name of tuple specified by the programmer.

<sequence> refers to existing sequence object like string, tuple, set or other tuple

7. Reading a Tuple from keyboard

We can also use tuple() function to read elements of a tuple by using keyboard.


8. Accessing elements of a Tuple

Each element of a tuple has an index associated with it.

Elements of a Tuple are also indexed in two ways:

Elements of above tuple are indexed as follows:

Similary we can access last element of above tuple as tuple1[5] or tuple1[-1].

10. Find number of elements in tuple

Function len() of Python returns number of elements in a tuple. The syntax of len() is

tuplename refers to existing tuple whose length we want to fine.

We can use ‘in’ and ‘not in’ operators with Tuples

We can concatenate two tuples together by using concatenation operator (+).

We can use replication operator (*)to repeat a tuple.

We can compare two tuples using relational operators of Python

Elements  of tuple are compared one by one. If any comparison is wrong, False is returned.

To Create a tuple from a set  of values is called packing and creating individual values from a tuple’s elements is called unpacking.

Syntax for unpacking in Python:

Number of variables at left side of assignment must match the number of elements in the tuple at right side.

There are four elements in it .

To unpack it, we can write:

First element of tuple will be assigned to variable a.

Second element of tuple will be assigned to variable b.

Third element of tuple will be assigned to variable c.

Fourth element of tuple will be assigned to variable d.

We can use del statement to delete an entire tuple. We can’t delete individual elements of a tuple as they are immutable

It can be deleted as